Trying to decide between the Proform 1000 vs 2000 Treadmills?

While the Proform Pro 1000 treadmill is a brand new 2017 addition to the Pro series, the Pro 2000 treadmill has been around for a couple of years (but updated every year).

The Pro 2000 even took home a Best Buy award from a leading Consumer magazine in 2016.

So how do these two treadmills stack up against each other?

And which one is right for you?

This post will review the main differences between them to help you decide. Here’s what you need to know:

The Proform 1000 treadmill is the most affordable model in the series, coming in around $999 with Free Shipping here. The Proform 2000 is the next model up – and it comes with a few more bells and whistles.

It also means the Pro 2000 might hold up a bit better over the long run (depending on how much  you use it.)

So you have more room to grow with the higher incline on the Proform Pro 2000. And with the decline you have a few more ways to crosstrain during your workout.

Both treadmills have an extra long 60 inch belt – which is great for runners who want to stretch out. However the Pro 2000 treadmill also gives you a wider belt (22 inches across vs 20 inches across) – so you also have a bit more room to move side to side here.

Both treadmills come with the standard hand grip EKG heart rate monitor in the front of the console. However with the Proform 2000 treadmill you also get a free wireless chest strap.

Many people prefer the wireless chest strap because it tends to give you more accurate results than the hand grips.

Both treadmills give you a backlit dual color console with all of your workout stats. However the Proform Pro 2000 console is just slightly larger than the Pro 1000 (7 inches across vs 6 inches). So it’s a bit easier to read.

It also has an extra stability bar under the console (see below) that can hold extra things like your remote control, phone, keys etc. The Proform 1000 does not have the stability bar with extra storage.

So while it’s a small difference it does make it a bit easier to read you workout stats.

The Proform Pro 1000 and the Pro 2000 look quite similar to each other – not surprising since they’re both ‘Pro’ series treadmills.

However the Pro 2000 does give you some extras that you don’t get with the Pro 1000 like a wider belt, more incline and even decline, a  larger console and a stronger motor.

If you’re planning on light walking you may not really need these things. However runners will definitely appreciate them – especially with longer workouts. For runners the Proform 2000 will just hold up better over the long run.

So it really comes down to how much you’re planning to use your treadmill and what your fitness goals may be.

Click Here for a Special Discount on the Proform Pro 2000

Click Here for Free Shipping on the Proform Pro 1000 Treadmill:

Proform 995 vs 1000 Treadmill Comparison – Which is Better for You? 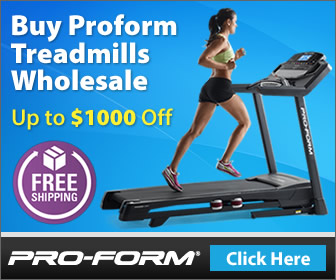